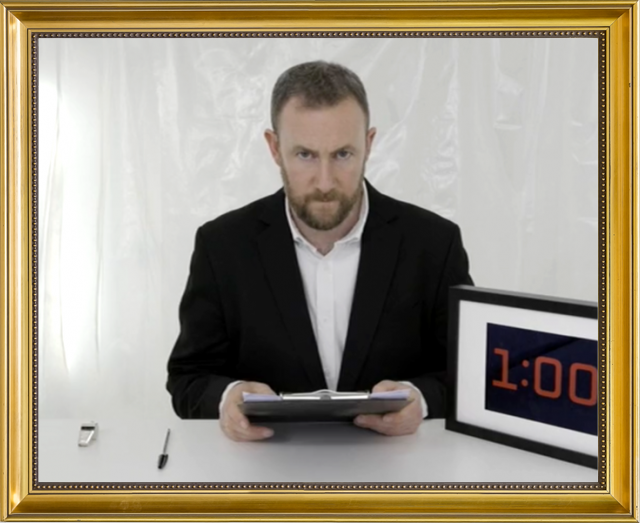 One of my favourite things about doing this silly show is that a number of schools (in a number of countries!) have started running their own Taskmaster clubs and events. I think this is brilliant.

If you are a teacher or think you might be able to do something similar, here is a little rundown of my experience of running a Taskmaster day in a school. I hope this helps. Do get in touch if you’d like more information.

So, I did a whole day of tasks with thirty year 5 kids. It was a mixed group of children aged 9 and 10 and while it worked well with this age group I’d worry such a big group of much younger might be tough. But that’s probably because I’m not a teacher. Also, I knew a lot of the kids pretty well (one of them was my own), and I think that helped.

I asked the form teacher (who was there throughout, with an assistant – both of whom were SO useful) to split the kids into 5 teams of 6 beforehand. Those groups were also mixed genders and friendship groups. This worked well, I think, and stopped things getting cliquey – they were still as competitive as the comedians.

We did tasks in the school hall and outside. The hall was great because of the space, but I also brought a few bags of miscellaneous bits and bobs (literally anything; hats, bananas, hula hoops, pencils, sponges, toilet rolls…) that were used fairly often. A classroom has the advantage of having things the kids could use, but there are also desks and whatnot that might get in the way. Outside was great, but partly because it was a lovely day!

The hall set up included a projector and a screen so I was able to play clips from the show (all on youtube) which helped get their attention. I also played in the welcome video that I filmed especially for schools and which is available here:

So, if you’d like to know the tasks we did, get in touch. We managed to get about 20 done; a mixture of physical and mental. We tasked from 10am until 12.30pm – which was quite intense but really fun! After lunch we did more from 1.30pm till 3pm – and and that was definitely enough for me.

Everyone received a VERY CHEAP prize, with the winning team coming up and choosing first (they all chose giant pencils), then the second place team, and so on (the last ones were mainly getting shoe laces, sponges or dog-poo bags (clean)).

The first task was them choosing their team name (using their initials), which set the tone. It was also a task that needed judgment. I found it very useful to call on their form teacher to make snap judgments so that I didn’t upset anyone! Although, to be fair, they took everything in their stride.

We also found that giving them their ongoing scores fairly infrequently helped – so halfway through the morning and just after lunch – that way no team got cocky or disconsolate.

Also, I picked a different person to read each task (which were all printed on thick paper and sealed with a sticker). They had to read them out loudly and clearly but I would always repeat them and explain them and answer questions before blowing the whistle to start the time.

Finally, as you’ll see, the majority of the tasks were done by all teams at once. It was chaotic and noisy and needed a bit of policing but it was really fun. I then got each team to talk through their tactics before revealing the results.

But I also did six solo tasks, in which one member of each team was called on to do a task against one member from each of the other teams. That way there was a bit of calm every now and again, and every single kid got to have a go at something.

That, I think, is that. Most tasks are pretty self-explanatory and they can all be changed however you see fit.

Some worked better than others but they all got them thinking and doing.

P.S. If you want more information on schools activity, drop me a line at taskmaster@avalonuk.com